Now that the flurry of activity surrounding the Jacques has subsided let me go back to last weekend. My favorite guy had a birthday on Saturday. We woke up to unseasonably warm weather that morning. I had to teach but we still managed to sneak in an early morning walk for coffee with the pups beforehand.

Once back from class we went to brunch at Mike’s Diner in the South End. Not very veg friendly, unless you want pancakes, but I wasn’t in the mood. I ended up getting a ACLT or avocado, cream cheese, lettuce, tomato sandwich and some potatoes. Nothing too excited about it but did the job. 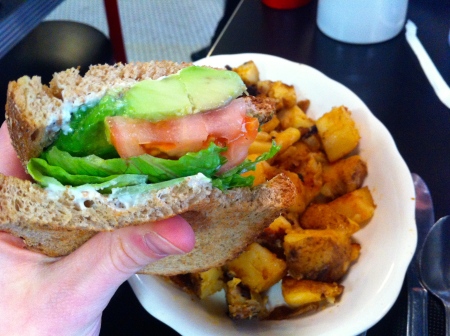 Michael had the turkey hash and looked very happy and handsome.

After brunch the birthday boy wanted to go to a movie. So we hopped on scoot and headed back to Fenway to see Argo.

Huge popcorn and soda for Michael, Raisinettes for me.

The movie was very, very good and incredibly suspenseful. I nervously chewed my nails through the entire second half. After Argo and The Town, I’m starting to really like Ben Affleck again.

After the movie we came home to get ready for dinner. I made reservations at Hamersley Bistro in the South End. Definitely an older crowd, but it had its own vegetarian section and lots of gluten-free options.

We started with some wine and red onion soup. The soup tasted just like French Onion soup but without the beef stock and bread. It was really yummy, I’m going to attempt a recreation at some point.

For our entrees, Michael had the roast chicken with fingerling potatoes. He said the chicken was tasty. The potatoes were so-so.

I had the falafel plate. The falafel was okay but the real stars were the roasted apples and plantains. Such a weird thing to find on a falafel dish but the flavors went perfectly together.

We came home for dessert. I made a gluten-free lemon cake with caramel ice cream. We were too full to taste it that night but I insisted he blow out a candle for good luck anyway. We actually still haven’t tried the cake so hopefully it still tastes good when we try it tonight.

We then promptly all fell asleep on the couch. Party animals. 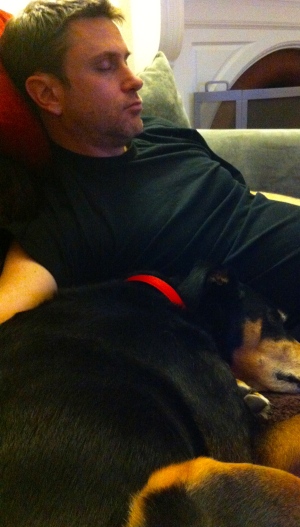 In celebration of the weekend, I present Little Bits of Random 3.

We’ve been getting outside as much as possible lately to soak up the last of the warm temps and the stunning colors.

Fall colors are in bloom all over the city now. 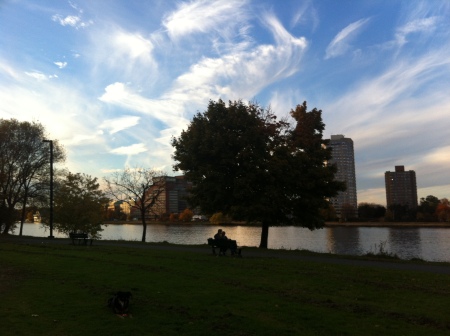 Dusk on the river. 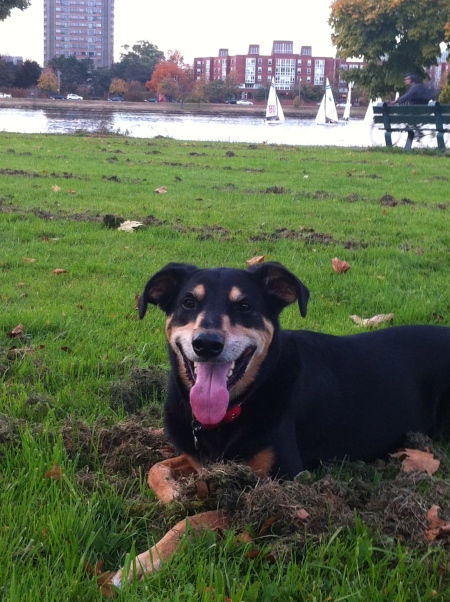 One very happy puppy after a long ball throwing session.

Guy loving up on Michael.

Eli on his third run of the week in Jamaica Plains. 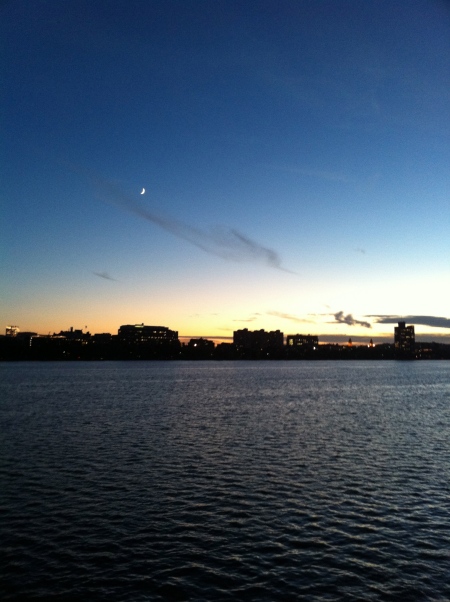 Have a lovely weekend.

This post was just titled Pumpkin Banana Smoothie but then Eli ate half my breakfast and the picture below is so priceless that I decided to do a little bits of random post dedicated to the pets.

I’m sorry I ate your bagel but you left it unattended lady. If I give you this look you’ll forgive me in 3 seconds right?

Me and Eli getting ready for a run. 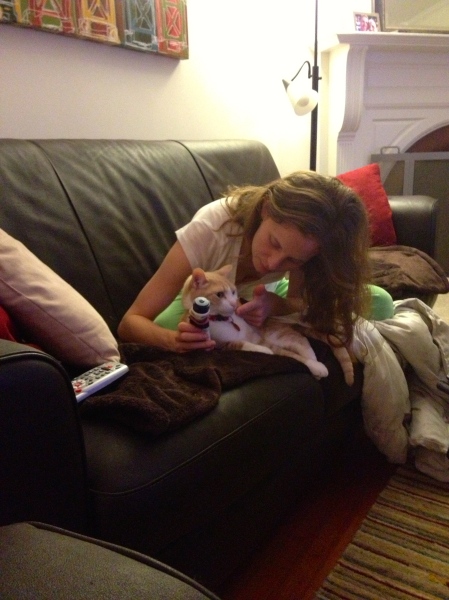 Apparently this is what morning looks like in our bed.

And how Guy looks when held against his will. 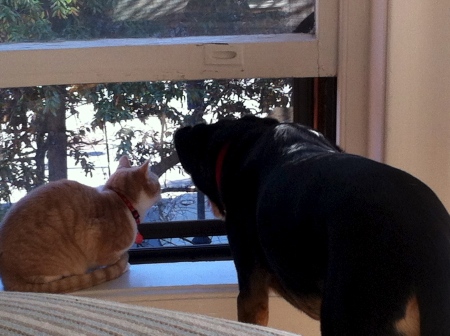 And for those of you who want the pumpkin banana smoothie recipe here it is, super simple.

Put all ingredients into a blender and blend until smooth.