Sometimes my own nerdiness takes me by surprise. I’ve never claimed to be cool but I never thought myself to be someone who would dance around the kitchen after tasting a salad dressing. Eli cocked his head to one side perplexed as he watched the scene take place.

I just couldn’t help it. After years of project managing creatives and allowing myself to believe that I personally was not “creative” it still amazes me that I can concept and actualize ideas of my own. It’s a lovely feeling that the swirling and pondering of a thought can become a tangible recipe I get to share with others. Another benefit the world of blogging has allowed me.

Anyway, on to the recipe.

Being in New York last weekend and not having a chance to get to the grocery store this week we’ve been eating what we have. We, of course, have more than enough food to pick from but our veggie supply is getting low. Our vegetable drawer currently consists of brussels sprouts, a 5lb bag of carrots, spinach and the ends of a bunch of cilantro.

I eat a lot of cilantro, usually a bunch a week. I will greedily eat up all the leaves, pushing the stems to the back of the crisper to wither and die until I buy the next bunch.

A few days ago I had what is now annoying referred to as an Aha moment. I ran across this Veggie Belly post that used the cilantro stems in a soup and it suddenly hit me that I was wasting a flavorful part of the cilantro.

I quickly dug out those stems and got to work on a what I hoped would be a delicious salad dressing. It was honestly better than I could have imagined and avoids wasted food and money. Win win.

Chop stems finely and place in a food processor with remaining ingredients.

Blend until well combined. I ran my processor for over a minute. 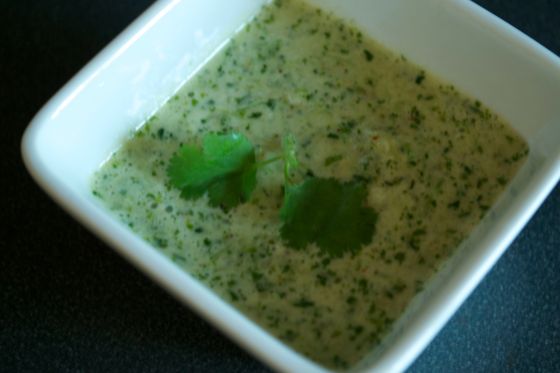 Makes 1-2 serving depending on salad size.

I massaged the dressing into 3 cups of spinach and topped with slivered almonds. I think it would be wonderful with avocado and baby tomatoes as well. 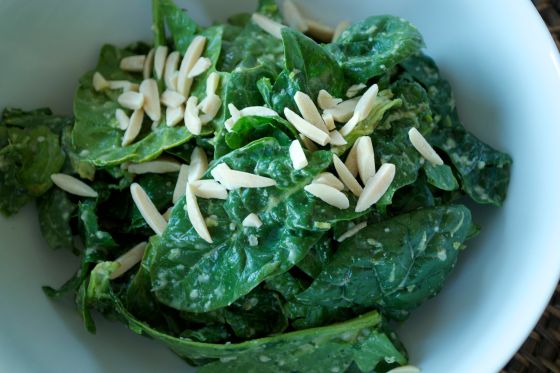 3 thoughts on “Cilantro Stem Dressing…say what?”