I’ve made three recipes over the last few days. They are all good. Tasty. Consumed. But none of them made my taste buds do handstands and arm balances at first bite. My official taste tester was also less than impressed with one of the three recipes, he didn’t taste the other two. I believe his exact words were ‘it’s a little bland.’ I’m not going to share a little bland with you all.

But, because I still wanted to post something and say hello today I’ll share the works in progress. Not so secretly, I also wanted to show off my new camera which makes my bad photo skills a little more palatable. However I’m still hoping to find a Photography 101 class I can take over the next few months. I don’t think good equipment equates to stunning photos without some knowledge behind them.

On to the recipes or lack there of, I mentioned this beet quinoa salad yesterday. I liked the earthy mixture of the beets with the quinoa and I love the addition of slivered almonds. I also made a cashew garlic cream to go on top which was exceptional on it own. The salad just didn’t sing when everything was mixed together. It has potential and I have another beet waiting in the wings so I’ll work on it. The color is pretty fabulous though right?

Next up, another calcium rich smoothie. Yep I’m making smoothies when it’s 10 degrees outside, God knows why. This smoothie was a mix of banana, apple, pineapple, almond milk and chia seeds. It was perfectly fine. I drank the whole thing this but it wasn’t amazing. I probably wouldn’t have shared it at all if not for the fact that the picture is nice. I’m going to try coconut milk instead of almond milk and may also add some sunflower seed or peanut butter. I’ll report back when I’ve got a winner. 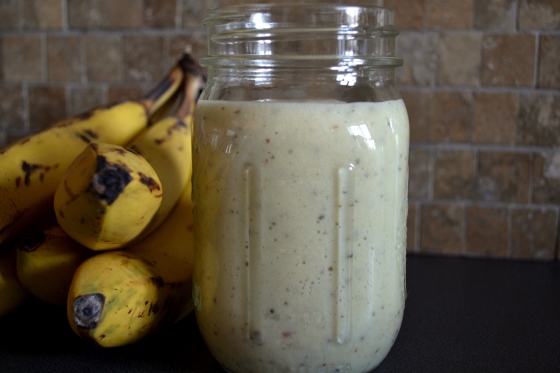 Lastly, I tried to make gluten-free banana bread this morning. I wasn’t in the mood for dates so following my recipe for Banana Bread Muffins was out. The recipe I concocted seemed promising as I mixed the wet and dry ingredients separately. When I combine everything though it resembled something oddly familiar. This! It was by far the tastiest of the three recipes and I ate two slices for breakfast but this is not banana bread. It’s more of an oat loaf. It was lacking the airiness of bread with all its heaviness. I think I’ll play around with the flour mixture, maybe try my hand at some gluten-free baking flour that’s been sitting in my pantry since the pancake debacle of 2012.

As you see, a lot of WIPs but not a lot of results. I suppose that’s all part of the process though. You have to cook a few duds or semi-duds to get to the really good stuff.

I hope you have a wonderful weekend. It’s still supposed to be bitterly cold here again tonight. But never free, we have a hot date planned with our fireplace and a bottle of wine.

I’m also teaching a bunch this weekend. My usual classes tomorrow at 9 and 10:30 and then subbing Sunday at 9 at Crossfit and teaching a special community class at Athleta on Newbury at 10. The community class is free if you’re not busy.

10 thoughts on “Works in Progress”